Working at Chainlink - Connect Smart Contracts to the Real World

Chainlink provides reliable tamper-proof inputs and outputs for complex smart contracts on any blockchain. The company is fully remote, with no offices or HQs and was founded in 2014.

Their goal is to make the next generation of smart contracts come to life, by allowing smart contracts on any blockchain to securely access any critical off-chain resource.

Smart contracts are on track to revolutionize how all agreements work, through an entirely new system of technologically enforced contract guarantees. Chainlink enables next-generation smart contracts that can be written about any/all events in the real world. Chainlink is well recognized for providing highly secure and reliable blockchain connectivity to the world's largest enterprises, such as Google, Oracle, SWIFT, and many more.

This is a unique opportunity to join one of the top companies developing cutting-edge blockchain technology while working closely together with a team of experienced senior developers so make sure to check out their open roles!

What makes ChainLink a great place to work?

The company created a unique solution to the smart contract connectivity problem in the form of ChainLink, a secure oracle network. What differentiates ChainLink from other oracle solutions is its ability to operate as a fully decentralized network. This decentralized approach limits the trust in any single party, enabling the tamperproof quality valued in smart contracts to be extended to the end-to-end operation between smart contracts and the APIs they rely on. Making smart contracts externally aware, meaning capable of interacting with off-chain resources, is necessary if they are going to replace the digital agreements in use today. More details of their approach can be found in Chainlink's whitepaper.

Their interview process consists of a mix of interviews and assessments to better get to know the candidate, their background and suitability to the role. A paid project is also included to allow the team to better understand the candidate’s skills. Finally an interview with the CEO, Sergey Nazarov is the last part of the process.

Their jobs are available here, so don’t miss out!

The work the team has done on Chainlink has been recognized by leading independent research firms such as Gartner, and featured in many leading publications such as MIT Technology Review, Forbes, and Coindesk. 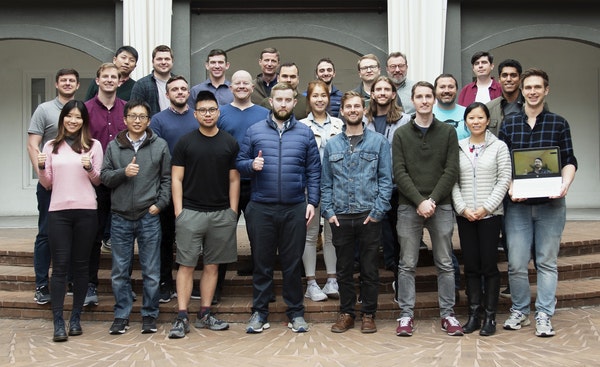 The team at Chainlink is building a world-changing product, which means that working with them will give you a large degree of responsibility. Meritocracy is a big part of Chainlink’s team, they are focused on achieving the common goal of evolving the way society's most important agreements actually work, by building the next generation of smart contracts. Chainlink also offers an autonomous work schedule with the ability to work from anywhere in the world.

Another important part of Chainlink, is they have an active, large and growing community that supports the success of the open-source Chainlink project. They pride themselves on building the best possible blockchain oracle middleware, which all smart contract developers can adopt to extend the functionality of their smart contract applications. They work in a rapidly developing space at the intersection of several fields, exploring and leveraging the latest research available in cryptography, game theory and computer science.

Joining Chainlink is a great opportunity to contribute to the latest advances in the field of blockchain, allowing you to grow personally and professionally alongside the world’s leading experts.

All their jobs are available here, check them out!

See other articles by Mihaela